The store will not work correctly in the case when cookies are disabled.
Trustpilot

Heiniger Clippers and the Power of Passing Down Knowledge 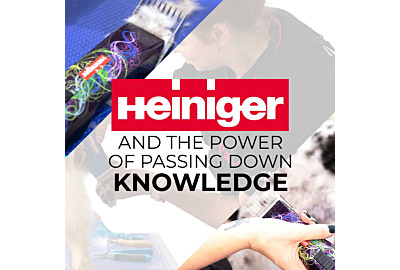 Posted in: Advice for Groomers, Product / Brands
By Jenny

Heiniger have been making high-quality, Swiss made clippers since the 1960’s and it’s no surprise that they have some of the finest shearing machines in the world. Recently becoming a 3rd-generation company, Heiniger instils a family focus within its company culture, passing down its wealth of knowledge from one generation to the next. As each generation grows its knowledge base, their clippers have consistently improved, giving groomers the power to groom at the highest level.

A History of Heiniger

Heiniger first made its name as a fruits and vegetables trader in 1941, however in 1956, the company seen a shift. Under the direction of uncle and nephew, Herman Heiniger and Werner Heiniger, the company decided to focus on making high-quality, precise animal shearers. They started by manufacturing and selling grinding machines for farming, before releasing their first cattle and horse clippers in 1965.

Due to their proximity to customers and with the power of precision Swiss engineering, Heiniger clippers quickly made its mark on the cattle shearing industry, ensuring that every shearer made was world-leading in its performance. After making its mark in the cattle community, Heiniger burst into the small animal market in 2008, introducing the Saphir, a cordless machine with tremendous power.

This move into the small animal industry was led by Daniel Heiniger, the 3rd generation of the Heiniger family to lead the company. Heiniger’s ability to adapt and dominate new markets seems to be a family trait, however, it’s Heiniger’s historical focus on family that continues to push these ideals forward. The company is not only just family run at management level but also cuts across all departments. One of its biggest keys to success is that across its employee base, it focuses on passing down expert knowledge to younger “family members”, creating a company-wide expertise in shearing.

The Heiniger Saphir was the first clipper by Heiniger that was designed purely for the small pet market. This innovative clipper has quickly become one of the best-selling clippers at Christies Direct. This lightweight clipper with has a slim handle, stays cool for long periods of time and as a cordless clipper, is one of the most powerful you can buy. It’s power and ability to clip comfortably for up to an hour stems from their expert engineering that had previously made their large animal shearers.

From here, Heiniger then developed the Saphir Style. This clipper contains the same power as the initial Saphir, yet this time they’ve refined the look of clipper, creating a sleek finish that looks good in any grooming salon. With the Saphir Style clipper, they’ve doubled its runtime, increasing its battery life for up to 2 hours.

The next major evolution in Heiniger clippers happened in 2018, when they released one of their most influential clippers to date, the Saphir Pink. This strikingly eye-catching clipper exploded onto the market and became a firm favourite with many groomers, including our very own brand ambassador for 2021, Kayla Harrison. The Saphir Pink has been built to last all day in the salon, and boasts a runtime of 120mins per battery, with a 1-hour charge time, making grooming all day easy.

Heiniger’s latest release is another decisive demonstration of their power and innovation. The Opal Clipper truly is a machine that will cut through any coat, leaving a completely smooth finish. It has two speed settings of 2600 and 3100 strokes per minute, with a rotary motor that’s built to handle even the heaviest of coats. However, the greatest thing about this clipper that we should be shouting from the rooftops is its noise level. This clipper is shockingly quiet, at 58db, making it perfect for even the most nervous dogs in your salon.

The continuing focus on evolving their clippers has led Heiniger to create some of the finest animal clippers available in the market. Using their family roots, they have tapped into what every groomer wants and needs, reliability, power, and awareness for the animals they are grooming. We can’t wait to see what they bring out next.